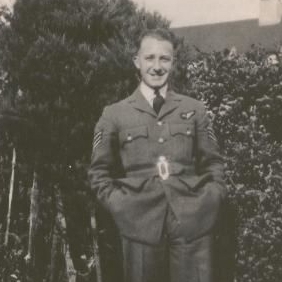 Sergeant Harry Legg from Ditchling was killed in action in October 1941. Harry lived with his family in Neville Cottages and after leaving Ditchling School worked for local building firm Stenning, Siddall and Co. He sometimes played cricket for Ditchling and was a member of Ditchling Social Club. He worked alongside Tommy Burt who was killed in 1944 in the days following the D Day Landings.

Harry joined the RAF at the outbreak of war and was trained as an air-gunner on Wellington bombers. On the night of 12th October 1941 his Wellington, along with many others, took off from RAF Alconbury, Cambridgeshire, and headed for their briefed target over Germany. A German night fighter attacked them and Harry’s plane was seen by several observer posts in Holland to crash just after midnight on 13th October 1941. Dutch rescue services were sent out to the location but there were no survivors among the crew of six. Harry was discovered still in his turret seat at the tail of the aircraft behind his machine guns. He had been hit by bullets from the night fighter in his left foot and right wrist. The rescuers stood watch over the bodies until daylight.

The British crew were buried on 15th October 1941 in the local cemetery at Westergeest with full military honours. German military forces arrived to bear the coffins to the graves and then a firing party of fifteen soldiers fired four volleys in salute. Large numbers of people came from considerable distances to pay their respects at the gravesides of these young men.